Abundance, when defined in an ecologic way, refers to the relative representation of a species in a particular ecosystem. That’s what’s going on in the ecosystem that is my backyard. My Japanese eggplant is producing like crazy, which is good and bad at the same time. How much eggplant can one person eat? The other veggie that is producing heavily is a Butterstick zucchini. This abundance is one of the reasons I sometimes wish I didn’t’ have my own plants and could just buy what I really want at the Farmers’ Market. But then there’s that other part of me that just loves being able to pick something and then take it straight to the kitchen. This year that is the side that won out so, I’m dealing with my abundance by eating a lot of eggplant and zucchini and sharing with my friends for as long as they will accept. Abundance has brought about need, the need to find interesting ways to fix both zucchini and eggplant.

About three years ago I found this recipe in Bon Appetite and have been using it every summer since. But, while the recipe is only focused on eggplant preparation I want to recommend that you also try it on summer squash. For this version I used the Japanese eggplant and the Butterstick zucchini in almost equal amounts slicing them to ½-inch thickness then placing them in a zip-lock with the marinade and refrigerating it for the afternoon, if you can, for 1-hour minimum. Bring the package room temperature before you grill. I usually take it out about an hour before grilling time. Grill until they are browned nicely on one side then turn. As in the original these are good right off the grill or served at room temperature.

Enjoy your weekend and don’t forget that shopping your local Farmers’ Market is the best way to buy the freshest fruits and vegetables possible. The only way to get fresher is to grow your own. Another bonus of shopping the Farmers’ Market is you can  sample before you buy and you can’t do that at your local market. 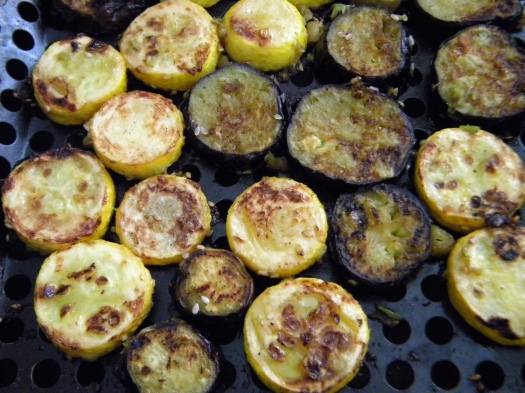 Prepare barbecue (medium-high heat). Generously brush 1 side each eggplant slice with green onion mixture. Cook until tender and charred in spots, about 4 minutes per side. Transfer to platter. Serve warm or at room temperature. Can be made 4 hours ahead. Let stand at room temperature.

One thought on “Abundance”