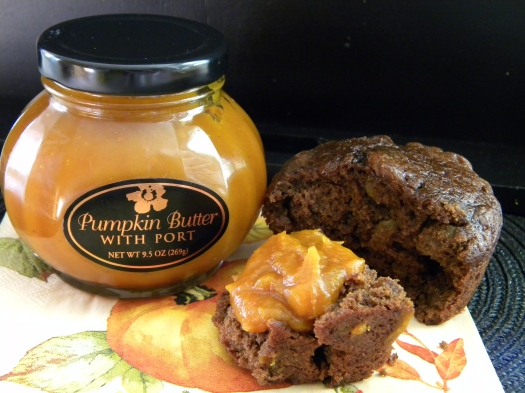 Foggy, misty mornings, not uncommon here in California’s central valley during winter,  are when I want to fill my kitchen with the aroma of homebaked spicy-smelling foods; like gingerbread muffins with golden raisins and chopped walnuts. Spicy-smells, like ginger and molasses weren’t really the only reason I chose to bake gingerbread muffins. The other reason was a little jar of Pumpkin Butter with Port that I had brought back from a trip to Washington (pictures from some of my travels can be viewed on my Flickr Photos – just click on a picture and you’ll be taken to the site) earlier this year. This wasn’t the first time I have purchased this butter, but it had been a while. So when I saw it I knew it was going home with me and sometime this winter it would be accompanying  some warm gingerbread.

As I started to write this I thought I should find a link to the company that sells the pumpkin butter, Aloha from Oregon, just in case you would like to try it too.  Having found the link I became curious as to the companies name since I hardly think of the word Aloha when I think of Oregon. Well it seems that the post office in Aloha, OR, just west of Beaverton, was established in 1912 and Robert Caples, a railroad man from the area, supposedly gave the the town it’s  name but the reason for its origin was unknown until 1983, when it was revealed by Joseph H. Buck of King City, that his uncle Julius Buck, was the first postmaster and that he named the office Aloah after a small resort on Lake Winnebago in Wisconsin, but that during the application process the last two letters were transposed by the Post Office Department, resulting the shift from a Midwestern Indian name to a Hawaiian word. Now, that’s a story I can believe.

For a recipe for the muffins I went to my James Beard’s American Cookery cookbook. Hopefully you can see the age and wear on this much loved book from my collection in the photograph.  This page contains not only the gingerbread recipe but the cornbread recipe I have used for the past forty some years.  I added the golden raisins and chopped walnuts to give the muffins more body and texture.  Another great combination might be dried cranberries and chopped pecans. They were served warm from the oven with the pumpkin butter and were deliciously satisfying.

Put the molasses in a mixing bowl and add the boiling water and butter. Stir until well mixed. Add the salt, ginger, and soda, and stir lightly. Stir in the flour just enough to moisten and mix. Turn into a 9 x 9 x 2-inch baking pan Bake at 375 degrees 25 – 35 minutes, or until the top springs back when pressed lightly and the mixture is pulling away from the sides of the pan.

I added about ½ cup golden raisins and the same amount of chopped walnuts. Baking cupcakes or muffins takes less time, test for doneness by touching the muffin top to see if it springs back when lightly pressed.

Sending wishes for a day filled with good food and good company.

The weather here in sunny Northern California has definitely changed.  Night temperatures have been in the 40’s, with the last couple of days barely hitting 60 with no sun to speak of.  Not exactly my favorite kind of weather. I much prefer the sunshine.  It’s these crisp fall days that remind me it’s time to start making one of my favorite meals again, soup. To my mind there is nothing better on a cold drizzly day than a hot bowl of homemade soup.

Soup was one of the things my mom often made during the late fall and winter months. It was the perfect way to feed eight growing children a healthy nutritious meal on tight budget. Sometimes it was made using beef bones, sometimes she used chicken or turkey and often it was with split peas or beans and veggies, lots of different veggies. Her soups were always delicious, filled you up and made you warm inside.

According to ehow\’s The History of Soup , soup making is considered to be as old as the history of cooking. Soup was and still is inexpensive to make; it’s filling and easy to digest making it the perfect food for young and old and all those in between.

I’m not much on canned soups. For me, they have far too much salt (needed as a preservative). But for many it is the only kind of soup they have ever experienced. I hope if you are one of those who has only experienced canned or processed soup you will try this simple soup recipe. It will provide you with a delicious soup in about a half hour. I know it takes more than opening a can but I promise you the little bit of work you do will be well worth the effort.

First pour yourself a nice little glass of wine. Take a sip and then pour a little olive oil in a two-quart pot, add about a cup and a half of quartered crimini mushrooms and sauté until they just begin to brown. Remove to a bowl. Next add equal amounts of chopped carrot, onion and celery (this is called mirepoix) I added about a cup of each. Sauté the mixture until the onion softens, the celery and carrot may not be soft but that’s OK. Then add about a quart of chicken or vegetable stock (your preference homemade or canned, but be aware of the salt content if your using canned) a diced potato (firm red or white skinned variety is preferred) and some fresh herbs, I used sage, thyme and parsley and bring to a simmer. Cook until the vegetables are just tender when you pierce them with a fork. With a potato masher, mash the mix a little to thicken the soup. Don’t mash too much unless you want a thick soup. At this point if you have mashed the stock and veggies a lot and want a thicker soup like chowder you can add some ½ and ½ and make it a cream stock and then add some diced cooked chicken or turkey. I didn’t go that route, but the more I write about it and think how tasty that would be, I may be trying that soon. Along with the chicken I added some leftover cooked green beans. Once it’s all together give it a good stir, let the chicken and green beans warm up and your soup is ready to serve. For a delicious topper I added some fresh sage leaves that I had sautéed in butter until they were crisp.  Shredded Parmesan cheese is also a nice addition to this soup but I didn’t add it this time.

Remember the mirepoix, it’s a basic for many soups and sauces.  Add some stock, fresh herbs, vegetables, grains, and meat if you wish and in about 30 minutes you’ll have an economical meal that will warm your soul and make you smile.

I have had this post in a folder on my desktop for two months now and for whatever reason, none of them very good that I can think of, I couldn’t get it from my desktop to Anniespickns. Yes, work was pretty intense for a month or so, and yes I have been running around seeing all kinds of beautiful scenery and getting my gardens planted but the article was pretty much done, just sitting there. But in my mind it would take more effort than I was willing to give to move it to it’s final resting place, until this morning. I awoke at 5:05am and was sure that the correct time was 6:05am since the time change occurred earlier this morning. Then after I had gotten up, put on the tea water and awoken my Mac I realized that I was indeed up an hour earlier than needed, and this on a Sunday morning. So after I read a few blogs I follow,  the guilt of not dealing with my own blog got the best of me and I opened the folder marked ananas.doc and got to work. Here finally is the result.

Last year I grew Ambrosia melons in my little garden.  They are by far my favorite melon so my intention was to grow them again this year. I don’t get very many off one vine, I think I got 3 last year, but there is something very satisfying about being able to pick a melon out of your backyard then take it inside, cut it open and eat it. Well, when I was at the Davis Farmers Market this spring looking for melon plants I found one called Ananas, an historic heirloom variety, grown by Thomas Jefferson in 1794 and offered commercially in the USA in 1824.   It sounded interesting, so I bought one, with the hope that it would equal or surpass my beloved Ambrosia.

Into the ground it went. It flourished and grew, and spread throughout the squash plant and intermingled with the Persian Baby Cucumbers. I fed it and watered it and dreamed of the day when I would finally get to taste it. I started seeing blooms, then small melons the size of the tip of my pinky.  The melons grew larger as the summer wore on. The melons continued to develop but still were very green. Just before Labor Day I noticed that the first melon was starting to turn a lighter color and finally it turned yellow. I checked it to see if the stem would fall away from the melon several times before it finally did. There it was, my beautiful Ananas melon, ripe and ready to eat. Into the house I went. I cut it in half. The aroma was sweet and the juicy ivory colored flesh had a blush of orange color in the center where the seeds were. Now the test, my first bite. Well, the flavor didn’t blow my socks off but it was good. I harvested three melons from my little vine and enjoyed each of them but I think I will go back to my Ambrosia next year, unless something else peaks my curiosity.

Here’s a bit of information I found when I was doing a little research on the Ananas; “The Ananas melon is one of the most popular heirloom melons grown in the United States today and is also widely grown in the Middle East. Another common name for this variety is Pineapple Melon.” Interesting that it is supposedly one of the most popular heirloom melons grown in the US and I had never heard of it and the farmer who I bought the plant from was trying it for the first time also.  Melons are part of the plant family Cucurbitaceae, which consists of squashes, melons and gourds, including cucumber, and luffas and those with edible fruits were amongst the earliest cultivated plants in both the Old and New Worlds.  The fruit is often a kind of modified berry called a pepo (a modified berry with a hard outer rind). For more information on “true” berries including a good description of the term check out my post  “Persimmons are true berries – What?”.