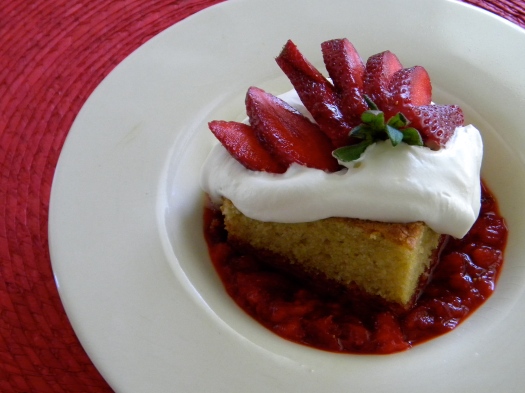 Did you ever wonder where the strawberry originated? The Woodland Strawberry, (Fragaria vesca) it is said has been consumed by humans since the Stone Age. I really don’t want to think about how archaeologists figured that out but it is written that they did, so we’ll leave it at that. Evidently strawberries were first cultivated in ancient Persia. Seeds were traded along the Silk Road towards the Far East and into Europe where they were cultivated until the 18th century. These species were largely supplanted by cultivation of F. X ananassa over the last 250 years. Native American strawberries were enjoyed by early settlers in the eastern USA, and in the early 1800s, F. X ananassa cultivars were brought to America from Europe. Plants selected in Pajaro, California became the basis of the California industry sited near Watsonville, the main strawberry region in California. Today, strawberries are cultivated in 73 countries worldwide with the USA producing about 27%. California alone outproduces most other countries. 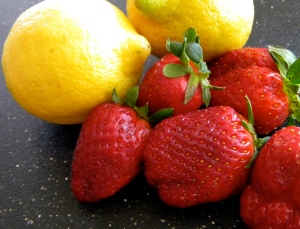 Even though Strawberries have been a favorite food of man for it looks like forever, strawberries are not one of my favorite fruits. But, sometimes they smell so good it’s hard to pass them up.  Such was the case Sunday when I purchased a beautiful basket of plump brightly colored, fragrant, organic strawberries at the Farmers’ Market. I also picked up a couple of lemons, some beautiful snap peas, a couple Fuji apples and some more Japanese sweet potatoes.

After lunch I spent some time browsing through recipes and found a clipping for Cornmeal Cake with Strawberries. The clipping touted the cake as the perfect foundation for unstructured strawberry shortcake so I decided to give it a try thinking it might be the perfect dessert for Mother’s Day.

Unsalted butter and cornmeal for preparing the pan

Preheat oven to 350° F. Butter the bottom and sides of a 9” round or square pan with 2-inch sides, then dust with cornmeal, shaking out excess.

In a bowl, stir together the flour, cornmeal, baking powder and salt.

Using an electric mixer beat the butter until creamy. Add sugar gradually and beat, scraping down sides of bowl once or twice, until creamy and light. Add eggs one at a time, beating well after each addition. Add lemon zest.

Combine milk and vanilla. With mixer on low speed, add dry ingredients in three batches, alternating with milk. Beat just until blended, scraping down sides of bowl once or twice. Spread batter evenly in prepared pan.

Bake until top is golden brown and firm to the touch, 35 to 40 minutes. Let cool in pan 20 minutes. Invert the cake onto a rack, then reinvert onto another rack. Cool to room temperature, then transfer to a serving dish.

Hull two baskets strawberries. Put half of them in a large bowl and crush with a potato masher. Slice the remaining strawberries and add to the bowl. Sweeten to taste with sugar. Add enough lemon juice to give the mixture a refreshing tart edge. Cover and Chill.

Just before serving, whip 1 cup heavy cream to soft peaks with 2 Teaspoons sugar. I flavored this with a touch of brandy.

To serve spoon berry mixture into shallow bowls, top with cake, whipped cream and a little more of the berry mixture. Serve immediately. Serves up to 8.

I really liked this cake. It’s not too sweet and has a really nice texture. I also think replacing the lemon with orange with work well. This would be a nice cake to eat along with any berry mixture.