There is much talk these days about “slow food”, but this is about “slow posts”. I have been trying for over a week to get this posted. I didn’t have trouble getting to the Farmers’ Market to shop, that’s part of my Sunday routine. I bought the shiitake mushrooms, asparagus, scallions, and more green garlic so I could try a recipe I had found for Ginger Fried Rice. I made the recipe. It was delicious. I even got photos taken but what didn’t happen was finding the time to write and put the words and photos together. I’m sometimes amazed how long it takes.  Do you have weeks where it seems like you go from Monday to Friday in just one day instead of five?

Also known, as Chinese black mushroom and black forest mushroom, shiitake are the second most cultivated mushroom in the world. They also have an ancient history being recorded in Japan back to AD 199 and in China there are written records of them during the Sung Dynasty (AD 960-1127). During the Ming Dynasty (AD 1368-1644), they were prized not only as a food but also as a remedy for upper respiratory diseases, poor blood circulation, liver trouble, exhaustion and weakness, and to boost life energy and prevent premature aging. Today they are still touted for their curative properties and extracts from the mushroom and sometimes the whole dried mushroom, are used in herbal remedies.

Prior to 1972 it was thought by the USDA that the species was invasive so cultivation was not allowed in the United States. In 1982, Gary F. Leatham published an academic paper based on his research on the budding and growth of the Japan Islands variety; the work helped make commercial cultivation possible in United States.

Today,  mushrooms have become popular in many other countries as well. Russia produces and also consumes large amounts of them, mostly sold pickled, something I have never tried. There is a global industry in  production, with local farms in most western countries in addition to large-scale importation from China, Japan, Korea and elsewhere.  A lot of the imported mushrooms come to us dried. They have a very rich flavor but I prefer the texture of the fresh ones.

The fried rice recipe I made was a variation on one I found on epicurious.com.

1 ½ tablespoons minced peeled fresh ginger (I recently read that you can freeze ginger root and just grate it into a recipe and that’s what I did this time and it works great. You don’t even need to fool around with peeling it)

½ lb asparagus cut on the diagonal into 1” pieces

½ lb fresh shiitake mushrooms, stems discarded and caps thinly sliced (you could substitute dried shiitake that have been soaked and drained, or you could try crimini but the flavor and texture of either of these will be very different than the shiitake. I definitely wouldn’t recommend using the white mushrooms.)

3 cups cold cooked white rice (I use a short grain white which tends to stick together more than the long grain but it worked just fine.)

Heat a wok or a 12-inch nonstick skillet over moderate heat until hot. Then add ½ teaspoon vegetable oil and swirl around wok/pan. Add half of egg mixture and swirl pan to coat bottom with a thin layer about 5 inches in diameter. When egg crêpe is set, about 45 seconds, transfer with a wide metal spatula to a plate to cool. Make another egg crêpe with remaining egg mixture. Roll each crêpe into a cylinder, and cut crosswise into ¼ inch-wide strips, then unroll. (This was so simple to do and I loved the way it looked and tasted. If you don’t want to make the crêpes, scramble the egg and water mixture)

Heat remaining 2 tablespoons vegetable oil in wok over high heat until it begins to smoke. Add ginger, white part of scallions, garlic and salt and stir-fry until fragrant, about 30 seconds. Add shiitakes and s and stir-fry until tender, 3 to 5 minutes. Crumble rice into wok add asparagus pieces and stir –fry until rice is lightly browned and asparagus is still crisp tender, 10 to 15 minutes. Remove from heat and add scallion greens, egg strips, and sesame oil, tossing to combine.

I don’t see why you couldn’t substitute broccoli for the asparagus. Just keep the pieces cut into sizes that will cook uniformly, or steam the broccoli separately then add at the end with the scallion greens and egg strips. I think I would also like to try this with bok choy as the vegetable. This is an easy meal to prepare, as with most stir-fries the longest time will be spent in preparation.

If you give this one a try let me know how you liked it and what substitutions you made. 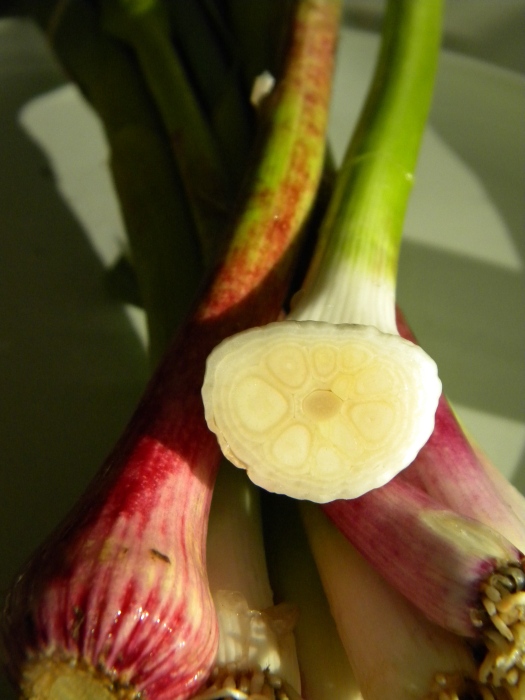 You can see the cloves starting to form on this one.

Sunday I got to the Farmers’ Market later than usual, it was already packed with people but choices were still good. The first thing I wanted to do was find the egg guy and trade in my used cartons. It seems like the only time I remember that I’m going to take them back is when I am at the market buying more eggs. Very happy with myself for finally remembering. Egg cartons returned and a fresh dozen in my basket I was off to see what looked good as far as vegetables go. I bought a nice bunch of chard, a green that I much prefer to kale or mustard greens, some beautiful, thin asparagus, some very nice baby spinach, more Fuji apples, tangerines and the subject of this weeks post, green or Spring garlic.

Garlic is a species in the onion family and green garlic is simply immature garlic, which has been pulled to thin the crop. Garlic, onions, shallots, leeks and chives are close relatives. Since I love all garlic’s cousins I guess it isn’t any surprise I love garlic. I love it in its mature form and delight every spring when I can get it in its immature form.

Green garlic is much milder than mature garlic. To use it trim off the root ends and any tough part of the green leaves. Chop or slice the white, light green and the first few inches of the dark green leaves (using only the leaves that are tender).

I read that the sticky juice within the cloves of mature garlic is used as an adhesive in mending glass and porcelain in China and that garlic has been around for about 6,000 years and is native to Central Asia. I also read that it was highly prized in early Egypt where it was even used as currency. 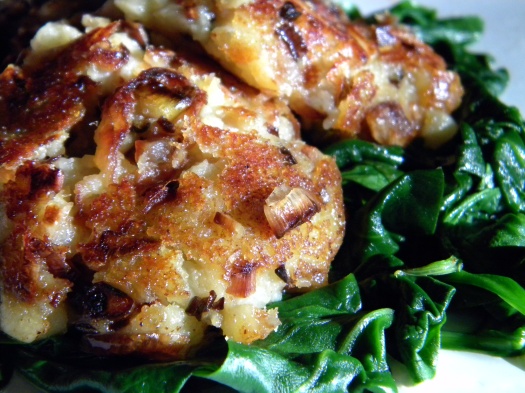 First I thinly sliced the garlic, then placed it in a fly pan with a little butter and let the garlic gently cook until it had browned and was a little crispy. This isn’t something you would want to do with clove garlic as the taste of the garlic would be bitter. That doesn’t happen with the young version.  I then added the cooked garlic and butter to the Japanese sweet potatoes that had been peeled and mashed with a fork. Once this was done I made some little patties from the mixture then added them back into the frypan with just a touch of butter and gently fried the patties until they were crispy and browned, then turned them and did the same to the other side. When they were browned on both sides I removed them added the spinach and a splash of chicken stock (you can use water) added a lid and cooked the spinach until it had just wilted. That’s it, another one-pan yummy treat. Perfect for a spring evening.

You can find a recipe for green garlic and baby Bok Choy from one of my March 2010 posts here if you’d like another idea on how I’ve used it. It’s also excellent in any egg dish, think cheese and bacon omelet with spring garlic. If you can find Spring or green garlic at your Farmers’ Market or market, give it a try. I think you’ll like it.